In this article, we’ll be looking into the various Tuition-free Universities in Germany for International Students as well as the various programs offered by each university.

To start with, let’s highlight a few reasons why you should study in Germany below.

Why Study in Germany

Germany is a nice place to study due to the following reason:

If you want to study in Germany, you’ll be pleased to know that public universities in Germany do not charge tuition fees for Bachelor’s and Master’s programmes (except if you’re enrolling for a Master’s degree that focuses on a subject that is different from the one you studied as a Bachelor’s student).

The German free tuition system is accessible for all international students, regardless of their country of origin.

You should note that the Federal State of Baden-Württemberg, at the end of 2017, reintroduced tuition fees of 3,000 EUR/year for non-EU/EEA students.

Most universities in Germany are public, so you will only have to pay an administration fee, which usually costs around 100 – 350 EUR/semester. This fee also covers your enrollment and the student organisation services.

It’s important to note that there are exceptions to this general tuition-free rule, however. If you don’t complete your degree course on time and you study in Bremen, Saxony, Saarland, Lower Saxony, Saxony-Anhalt or Thuringia, you may have to pay tuition fees.

Also, you should keep in mind that programmes in Engineering and Business & Management are the most expensive.

Having known this, check out the list of Tuition-free universities in Germany for International Students.

This section of the post will be taking you through 10 tuition-free universities in Germany for international students.

The Ludwig Maximilian University of Munich is also known as LMU. The university was established in 1472 and ranks as one of the top best universities in Germany. LMU offers some of the best programs in the world; some of Its programs include Physical science and Arts & Humanities courses which rank 21st and 18th respectively internationally.

The Ludwig Maximilian University of Munich has been a tuition-free University since 2013, but only charges a nominal fee for Certificates or certain professional or graduate degrees.

The Technical University of Munich (TUM) was established in 1868 and ranks in the top 2 Universities in Germany. Its main campus is in Munich, Germany, and has branches in Freising, Garching, Singapore, and Heilbronn.

Like it is in almost all other public universities, TUM is a free tuition university but will charge for certificates and graduate degrees. Students may also need to pay a semester fee ranging from 62 Euros (in Straubing) to 144.40 Euros (in Munich, Garching, and Weihenstephan)

About 32,000+ students are studying at the Technical University of Munich of which one-third of the students come from abroad.

The Humboldt University of Berlin (HU Berlin) is a Tuition-free public research institution based in Berlin, Germany. It was established in 1810 as the University of Berlin thanks to the names that play a major role; Wilhelm Von Humboldt, Johann Gottlieb Fichte, and Friedrich Schleiermacher.

It was Formerly known as the Friedrich Wilhelm University; HU Berlin and ranks as the sixth-best university in Germany. The University’s programs are ranked in the world with Arts & Humanities ranking 20th and Law ranking 25th.

HU Berlin has about 33,000+ students with 18 per cent of them being international students. A semester fee of 300 Euros is the only charge; this covers a seasonal transport pass and some fees for student organizations.

Being a free tuition university in Germany, a semester contribution of 500 Euros is the only charge aside from the 1,000 Euros for comfortable living in Aachen.

The University has 37,000+ Students of which 13% are international students. The University of Bonn is organized into 7 faculties; including Protestant Theology, Catholic Theology, Law & Economics, Medicine, Arts, Mathematics & Natural science, and Agriculture.

Only a small contributory fee of 300 Euros a month is the only charge. This fee covers transportation in Bonn, Cologne, and other regions.

The Free University of Berlin (FU Berlin) is the tenth best university in Germany. It was founded in 1948 as the West Berlin chapter of the Frederick William University. Currently, Over 36,000+ students are enrolled in FU Berlin of which 22% of them are international students.

Being a Tuition-Free University, there are no Tuition fee charges except for certain graduate programs. A contribution of about $313 is required to cover the enrollment/registration fee, student union, student support service, and transportation tickets.

Also known as the University of Göttingen and Georgia Augusta. It is the eleventh-best university in Germany and was founded in1734 by King George II of Great Britain to promote the paragon of enlightenment.

The university has over 30,000 students enrolled and a foreign enrollment rate of 13%. A contribution fee that amounts to 376 Euros per semester is all charges that are required. 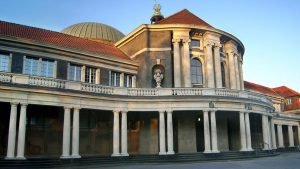 The University of Hamburg (UHH) was founded in 1919 and ranks the 12th best University in Germany. It is known for its Arts & Humanities programs, physical science, Life science, Social Science, and Business degrees.

There are over 30,000 students enrolled in UHH with international learners representing 12% of the total. Some of the courses offered by this university include Law, Business Administration, Economics & Social Science, Education & Psychology, Humanities, Medicine, Mathematics & Computer Science, and Engineering.

Aside from living costs, UHH students also need to pay about 322 Euros per semester that covers transportation passes, a hardship fund, administration fees, and the studierendenwerk.

Founded in 1798 as the fourth university of the Holy Roman Empire- making it the sixth oldest university in central Europe. The university is operated by the state of North Rhine-Westphalia and is organized into 6 faculties; these include Faculties of Arts & Humanities, Management & Social Sciences, Mathematics & Natural Science, Medicine, Law, and Human Science.

The University of Cologne has a total of 34,500+ students with 18% of them being international students.

The University of Cologne is tuition-free but there is a need for the students to contribute 500 Euros annually for public transport passes, administrative fees, and more.

Goethe University was founded in 1914 as a citizen’s university which was named after its location Frankfurt am Main before it was eventually dedicated in the honor of Frankfurt native Johann Wolfgang von Goethe.

It has one of the biggest student populations with 46,000+ students with 16% of them being international students. The university has 16 Faculties that include the faculty of Law, Business, Education, Social Science, Psychology, Theology, Philosophy & History, Linguistics, Modern Languages, Computer Science, Physics, Biochemistry, Biology, Geosciences, and Medicine.

Only 370 Euros is the only fee that needs to be paid per semester which covers administrative fees and certain funds.

We hope this article has shed more light on the various Tuition-free Universities in Germany for international students. You can visit the various universities ’ websites attached to their name to know more about them.

Thanks for reading and do check out the blog page for more articles like this.